Macumba, like voodoo, appears to be both exciting and romantic to the visitor, but many of these forget that macumba is a religion to a large proportion of the Brazilian population.  It should be treated and respected as such. White Oak Grove CUUPs was thrilled  to have a recent discussion group on the religion lead by Betsy U.  Betsy lived in Brazil for some time and was able to give us an exciting and unique perspective on Macumba.

According to Britanica.com macumba is an “Afro-Brazilian religion that is characterized by a marked syncretism of traditional African religions, European culture, Brazilian Spiritualism, and Roman Catholicism.”  Developed over time to be a characteristically Brazillian, it is a religion followed by young and old, rich and poor, the educated and uneducated. The belief in Macumba is that both good and evil spirits (many of which have a corresponding Catholic Saint) influence all aspects of our lives. 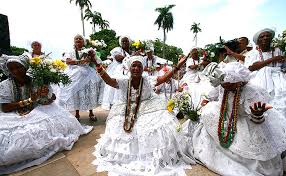 Candomblé is practiced in Bahia state, is considered to be the most African of the Macumba sects.  This is an oral tradition, without holy scriptures. The BBC’s Candomblé At A Glance shares that practitioners of Candomblé believe in a Supreme Creator called Oludumaré, who is served by many lesser deities, called Orishas.  Each and every practitioner is believed to have their own tutelary orisha, which controls his or her destiny and acts as a protector.  Music and dance are important parts of Candomblé ceremonies, since the dances enable worshippers to become possessed by the orishas.  Candomblé does not have a concept of good and bad; each person is required to fulfill their destiny to the fullest, regardless of what that is.

Umbanda is practiced in urban areas such as Rio de Janeiro and São Paulo, is more sophisticated and reflects Roman Catholic, Hindu, and Buddhist influence.  ReligionFacts.com tells us that “There isn’t uniformity of belief among all followers of the Umbanda religion, yet there certain beliefs that are widely held. These beliefs include faith in a supreme deity called Olorum (or Zambi), who has various representations. Many followers of Umbanda also believe that various Catholic saints emit divine energies and forces called Orixas. It is also common for adherents to seek interaction with the spirits of the deceased. The ideas of karma and reincarnation are also centrals tenets of the religion.”

It is interesting to note  that the Catholic Church in Brazil must tolerate Macumba or risk losing many Catholics that would move over completely to the tradition of Macumba. Betsy shared with us that in many of the shops connected to Catholic Church, patrons can also buy candles, charms, and supplies needed to worship the distinctly un-Catholic deities.

If you’re looking for an interesting read on Macumba to pique your interest, check out this New York Times article MACUMBA: Brazil’s Pervasive Cults.